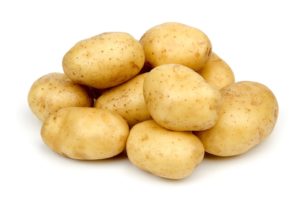 Now here is a game that is sure to become a family favourite and part of your family brand.  You play with potatoes, yes, potatoes!  Every player needs a potato.  Usually best when there are eight or more players then the game goes on for longer.  You can play with up to 15 people.  Any more than that and I would split the group in two. Play around a table or even better, in a circle on the floor.

Each player needs a potato (oranges also work although the can tend to roll so potatoes are better) and must sit in a circle. Potatoes get passed to the player on their left as the group calls out PERRARA. This is how the chant goes:

Get into a rhythm slowly and then start speeding up. As players make mistakes they are out and must take their potato with them and the circle gets smaller. Eventually there will be just two players left. They then sit opposite each other and move their potato diagonally to the left of their opponent. So, the movement becomes forward and backward instead of side-to-side.  The first person to make a mistake is out and you have a winner.

Perrara provides you with a guaranteed dose of hilarity.  It’s been a firm family favourite of ours since I was a kid.

You can check out a video of Perrara being played here.  Have fun.